I was born in Nottingham on the 20th November 1997. By the 13th December I was fighting for my life with bronchiolitis and pneumonia coupled with severe complications. Despite this difficult start in life and perceived weakness, I was an energetic child. I loved to run everywhere and would be comforted with a small football in my hand or at my feet. By the age of three I had my first Notts County kit. 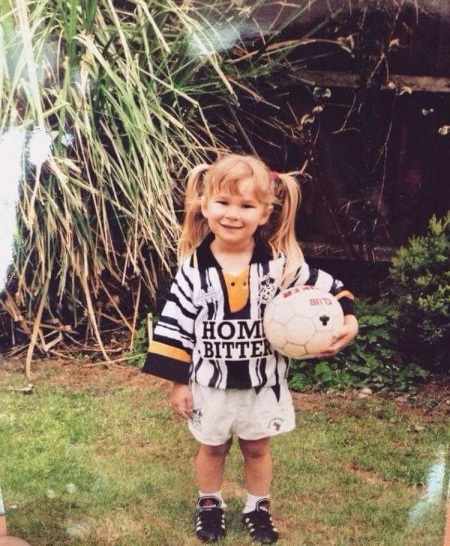 My passion for Notts County evolved through watching games at Meadow Lane from the age of two and the love my family share for the club has continued from 1926. My grandfather Tom was also a passionate supporter, as well as the first team coach for Clifton All Whites, an outstanding Nottingham boys team that provided many a talented player to the Notts County ranks. My father Trevor joined Notts as a youth player in 1971 and I have fond childhood memories looking through his scrapbook of achievements.

At 7 years old I began to play football at primary school. Being the only girl who played, I would often take part in the school games with the boys at break and lunch times.

The caretaker, who doubled as the girls football coach, noticed my ability and recommended playing for the school and a local football team. This caretaker and coach proved to be a wonderful ally in my world of football and became my coach again in future years.

My football journey had begun, as had the hunt for a local team. The lack of girls teams and leagues didn't go unnoticed but this did not dampen my energy and commitment to play football. Within two years I had joined and played for a newly created West Bridgford girls squad on a Sunday as well as Edwalton Cavaliers Boys on a Saturday.

Unfortunately as I reached my 12th birthday, I was reminded of the Notts FA rules. They dictated that I, as a girl, could no longer play against or alongside boys. This led me to scout for a new team. Despite being the only girl in the entire club, I had grown to love every minute and was sad to have to leave. Before I left, my manager told me to let him know when I “play for England”. One day I hope I can do this!

As I reached GCSE school age I had developed a burning passion for professional football and started to dream of becoming professional myself. The barriers for girls and women in football were huge but I was undeterred. My family encouraged me to study hard and strive for my dream. I successfully achieved 10 GCSEs and joined sixth form to study A levels. At the same time, an opportunity to trial for Notts County Ladies development squad arose.

Whilst this was a fantastic development, there was no recognised pathway from the club to the Women's Super League side, Notts County Ladies. Despite this, I played my heart out in the trial and was successful in attaining a place in the development squad. I played well in several pre season games before going on holiday secure in the knowledge that a great season and challenge lay ahead.

Within a few days, I began to feel extremely unwell on holiday and before long, for the second time, I was fighting a very serious illness. I had developed glandular fever, pneumonia, an enlarged spleen and liver as well as three severe infections. I spent 12 days in hospital before I was allowed to fly back to the UK to start my recovery with a view from the consultant that I would not be playing competitive football for about 2 years. 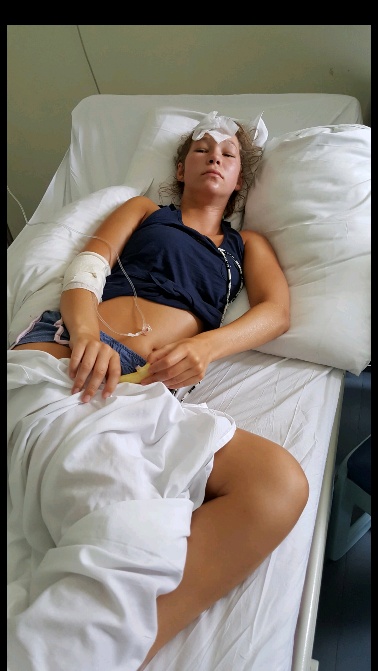 I was also comforted by the hospital consultant who told the story of Cristiano Ronaldo, who managed to return to top flight football following his bout of glandular fever. Although he will never outshine Messi, it is evident that he made a great recovery!

It was impossible for me to play football for the next few months but I did manage a substitute appearance by late November and went back to full time training. In the same year I successfully completed my A levels and was proud to achieve a 100% score in my final English Lang/Lit exam. Proud, as it was very difficult to concentrate with debilitating tiredness in the aftermath of my fever.

The following year I was battling hard for fitness and starting to perform to a high level in the development squad consistently. Sadly, Notts County Ladies first team was disbanded by the club due to its costs and player wages. This was a gut wrenching decision and a blow to all talented and aspiring girls and women footballers. As a consequence, the development squad ceased to exist and was resurrected as Eastwood Town ladies playing in the East Midlands Regional Premier League.

During these changes, I was keen to continue working to earn a living whilst striving towards my dream of professional football. I successfully completed a full time nursery practitioner apprenticeship, caring for babies and young children with additional college study, whilst training hard and playing very well for Eastwood Town Ladies. When I look back it's hard to imagine how I summoned up the energy to do all of this. However, things were improving so much on the pitch that I was voted player’s player of the year and most improved player at the end of the 2017/18 season.

I felt that 2 years on from my illness, I was finally getting back to full fitness and delivering on every level. I played well in trials for Spurs first team at their London training ground and had trials scheduled for two other high profile league affiliated clubs. Later in the summer I had agreed with a Championship clubs’ first team coach that I would join the team for pre season training with a view to signing when I became aware of the reformation of a Notts County Women, alongside a girls academy, creating a pathway from the girls under 9s to the first team.

My heart was still with Notts County, and my desire to play football for them and follow in my family footsteps was immense. I attended and played well in each trial and was delighted to be offered a contract to play for the first team and join a 5 year journey back to super league football. It was a decision not taken lightly but the right decision nonetheless. decided to join Notts and was very proud to become the first signing for the reformed team. 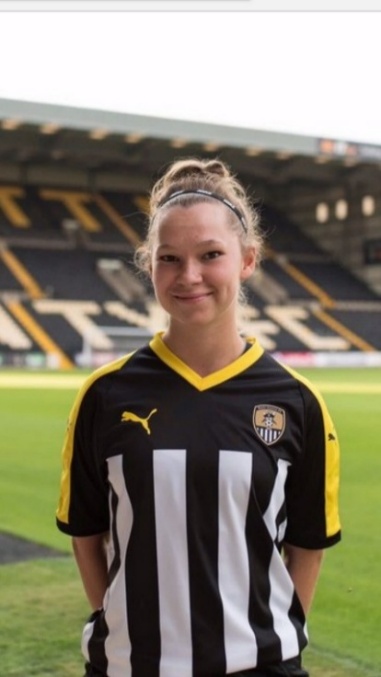 After a lot of thought and family discussion we also agreed that I would reduce my paid working hours to accommodate the extra training and dedication required to make an impact. The financial hit I decided, was worth it in exchange for more time training and hard work on and off the pitch.

I am delighted to say that we had an amazing 2018/19 season coming runners up the league as well as plate finalists. The pinnacle of the season was a 2-1 home win at Meadow Lane against the league leaders at that point of the season. I was an influential midfielder in our unbeaten league run from mid November until the end of the season and enjoyed every minute with the club. I have signed a new contract for the 2019/20 season and anticipate a league championship alongside a good league cup run.

Paying for football and meeting the usual bills of life can be difficult at times. This is why I am very grateful to Woodthorpe Hospital and Marcus Taylor HD in particular, who has stepped in to support Notts County Women in their quest to return to top flight football and for supporting me financially in a partnership that will see women in football and women’s health take centre stage. The timing is perfect as it will support me both with my physical and financial wellbeing but also in continuing the warm glow felt in the country by the fantastic Lionesses performances in this summer's World Cup. It is beyond incredible to watch each Woman play fantastic football whilst often pursuing other jobs and building families. My ambition to play professional football for Notts County, and who knows at 21 I am still young enough to play at the highest level, is undimmed.

Thank you Marcus, Woodthorpe and Ramsay healthcare, I and all at Notts County Women are delighted to be in partnership with you.